In partnership with Conwy Council and Sport Conwy we’re offering an opportunity for North Wales Housing tenants to have a go at E-biking!

If you would like to know more about this exciting opportunity, please contact Iwan on [email protected] or 01492 563232.

We will be taking part in this careers event Thursday 21 January 10am – 12pm, join us to find out more about our current vacancies. 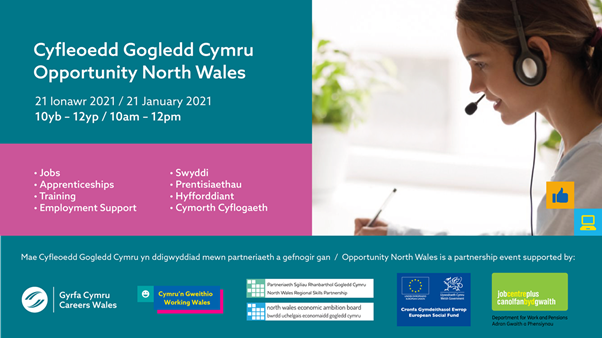 North Wales Housing and Adra will be available at this virtual event to give information and receive feedback from the local community about the Plas Penrhyn development in Penrhyn. The Plas Penrhyn scheme includes eight 3-bed and eight 2-bed houses, four 2-bed bungalows and one 2-bed bungalow with wheelchair access, all with designated parking.

We would like to invite you to a virtual webinar with Adra and North Wales Housing, to see the plans and talk through the proposals.

How to register for the webinar

Register for the webinar here:

If you can’t attend but would like to submit any questions about the scheme ahead of a virtual webinar please email your questions to [email protected].

New affordable housing development Nant Eirias in Colwyn Bay was officially opened by Hannah Blythyn AM, Deputy Minister for Housing and Local Government at an event on Thursday 3rd October 2019.

A total of 12 one and two-bedroom apartments have been built by North Wales Housing as part of the £1.5 million project.

“We are extremely pleased to have created 12 new affordable rent homes in Colwyn Bay. This is the result of great partnership working with Conwy County Borough Council. By working together, we have improved the housing prospects of young local families and helped tackle the wider issue of housing shortage.

The new homes were North Wales Housing’s first intermediate rent development; this means they are aimed at people in work, or who can pay the rent without financial assistance but will be less than the rent charged for a similar home in the area from a private landlord. Lettings were managed by Tai Teg, Conwy’s Affordable Homes Register.

The new development forms part of Conwy County Borough Council’s Bay Life Regeneration Programme; developed with the support of the Vibrant and Viable Places grant from the Welsh Government.

“We want to support our towns to ensure they are attractive, vibrant places for people to live, work and visit – and I was pleased to see the completed development and hope the residents will be happy in their new homes.

“This site had been an eyesore for years and, given its location, it was ideal for residential properties. So, I’m very pleased to see this development of good quality, affordable homes come to fruition. Affordable housing for local people is a key priority for the Council and this project is an excellent example of what can be achieved when we work together.  I hope the tenants are settling in and I wish them all the very best in their new homes.”

There have also been many community benefits, including local training and employment opportunities.

The new homes are efficient in terms of energy running costs – a key consideration of the scheme’s funding through Welsh Government and Conwy Council’s Vibrant and Viable Places and Social Housing Grant.

Bus Stop Project will be visiting your estate for a period of 7 weeks as part of a Health and wellbeing project. The blue bus will be parked on your estate!

We had a busy week at this year’s National Eisteddfod in Llanrwst this year.

Thank you to those of you who came along to our stand and took part in our many activities! We achieved our goal of cycling the 186 miles from Llangollen to Abersoch then Holyhead. We had over 200 entries for the children’s drawing competition too, which made judging very hard!

We held a tenant competition to win tickets; congratulations to those who won, and thank you Ace for popping to say hello!

You are invited to join in an art project coming up at Tre Cwm, Llandudno about a wall, with lots of free workshops and events:

Everyone welcome – Follow the signs around Tre Cwm to find us!

Snacks and refreshments will be provided at all events.

The aim of this project is for us to come up with an artwork for the wall along the A456 roundabout. How can it represent the uniqueness of Tre Cwm? What are the stories that will bring it to life, and invite people to learn about each other? How do we capture the project digitally? These are some questions we can start with.

Kristin Luke is the artist-in-residence for Tre Cwm. Originally from Los Angeles and having moved to North Wales in 2017, she makes work in sculpture, digital design and film, about education, architecture, and utopias. You will probably see her quite a lot around the estate!

This is a big new exciting project, which definitely needs a big exciting group of people to make it happen!

#thewallis and add your own #adjective

During a recent visit to Bangor by Christina Rees MP, Shadow Secretary of State for Wales called at Y Gorlan. She was warmly welcomed and given a tour of the site, heard about the scheme and met residents and our staff.

As part of a programme of events in Wales to commemorate and celebrate the RAF Centenary, the city of Bangor will be hosting a major RAF parade and flypast on Saturday 8 September. The event will be one of the closing RAF Centenary events and is intended to recognise the strong links that North Wales has had with the RAF over its last 100 years.

For Bangor, these connections go back to the very beginning of the RAF, when we had an “RAF Bangor” in operation in 1918, with Number 244 Squadron flying Airco DH6 aircraft from Abergwyngregyn, carrying out anti U Boat patrols in the Irish Sea. Although RAF Bangor was closed shortly after the end of World War 1, this remains a unique and special connection for the city of Bangor to commemorate as the RAF celebrates its centenary in 2018. And today, the strong connections between Bangor and the RAF continue, with RAF Valley having been granted the Freedom of the City since 23 March 1974.

On Saturday 8 September, the RAF Centenary celebrations will come to Bangor, with personnel from RAF Valley, as Freemen of the City of Bangor, marching through the streets of the city. They will be joined by the Central Band of the RAF, together with a number of Air Cadets from squadrons across North Wales.

The morning will begin with a special RAF Centenary Cathedral Service, commencing at 0945 am, to which all members of the public are welcome to attend. At 11.15am. the RAF parading contingent will present arms at the War Memorial, which will include a flypast by Hawk aircraft from RAF Valley. There they will be welcomed to the City by His Worship the Mayor of Bangor, the Lord Lieutenants of Gwynedd and Clwyd together with VIPs and guests from across North Wales. The senior RAF Officer at the parade will be Air Marshal Michael Wigston, who was himself brought up in Bangor and was a pupil at Friar’s School.

At approximately 11.40am the Parade will step off from the War Memorial to exercise the Freedom, marching past the Cathedral and turning left down the City’s High Street. At the Town Clock the Mayor, the Lord Lieutenants and Air Marshal Wigston will take the salute. The Parade will then proceed down the High Street to Dean Street, and then fall out at around 12.00pm.

The Mayor of Bangor, Councillor John Wynn Jones said “Both Bangor and many other areas across North Wales have strong links with the RAF over many years and Bangor is honoured to be the host of this prestigious RAF Centenary event. With the RAF marching through the streets of Bangor it gives the public the opportunity to show their appreciation for the loyalty, dedication and excellent service that the RAF have given over the last 100 years, and the many RAF personnel who have lost their lives over this time. The fly past by Hawk aircraft from RAF Valley and the spectacular and colourful Parade, will be a memorable event and well worth witnessing. Everybody from Bangor and beyond should make an effort to come and be part of the celebrations.”